I am in Byblos, Lebanon. This is my 4th or 5th visit to Lebanon, but only my second time here searching for information about the Saliba name. The last search was exactly a year ago and I learned a lot and I shared all of that with you, but this visit provided even more and I am excited to share that with you, too.

On this trip, I was searching for Tannous el Murr, a man referred to be by our cousin Walid whom I met last year. Tannous is a retired teacher (a job I'm trying to get) and for many years has been researching the history of the Saliba family. I called the family in Bteghrine and asked if I could be introduced to Tannous and, as usual, they all were excited about my visit and welcomed me to their home again.

When I arrived I was greeted by Elias (Dad's first cousin) and his wife, Simira, Sammy and his wife and kids, Michael and his wife Carmen (the only one who spoke English), their kids and Tannous el Murr himself. 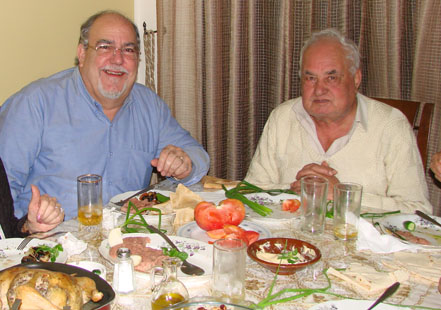 Later even more relatives arrived and I ate for 3 hours a tremendous home-cooked traditional Lebanese dinner. But first I got to visit with Tannous.

Tannous speaks Arabic, French and a little English. He had with him a spiral bound notebook full of hand-written notes and charts and he had several A3 size papers each with well-drawn family trees with hundreds and hundreds of leafs each containing a single first name of the sons. Yes, daughters are not included and as he was adding to my branch, he ended it with a leaf that read 'daughters'.

But it's the other direction, back down the trunk of the tree, that I was interested in and he has the full record all the way back to 1624! It's an amazing collection of information. I took high resolution pictures of just 2 of the pages 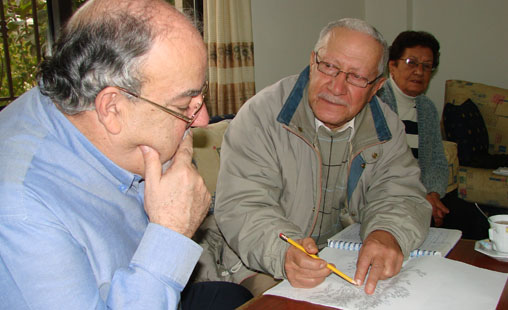 I was interested in and I will get them translated in Cairo. This fully shows the relationship of all the Salibas from Blytheville. It shows exactly how Dad and Eddie were related. It included Eddie's full heritage as well as many, many others.

Tannous seemed to have no idea of what to do with this information. No plans for a book. So I am talking to him about allowing me to attempt to translate and publish his work on the Internet. 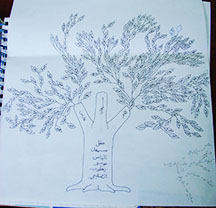 He is thinking about it, but I don't think he fully understands what the Internet could do for him. He has the records of all the Salibas up until the time they left Lebanon. If this was on the Internet, families all around the world could trace their heritage just like I did and they could add their own information. Anyway, soon I will have the translation and I will share it with you. {Click HERE to see the high resolution family tree}

One final thought. Joe, the 21 year old son of of Sammy, came from Beirut to help translate for the family. He is a nice enough young man who was a big help, but he did not understand what I was doing. He asked me why do I care what my roots are. It doesn't matter and it doesn't change anything. This coming from a young man with no children who is fully aware of his heritage. Maybe he's right and it doesn't matter, but I told him that it helps us learn who we are. It might explain why we are the way we are. And it gives us a connection with the past. Maybe he's right and it doesn't change anything, but I have enjoyed the searching, and I think Tannous el Murr has enjoyed the collecting. 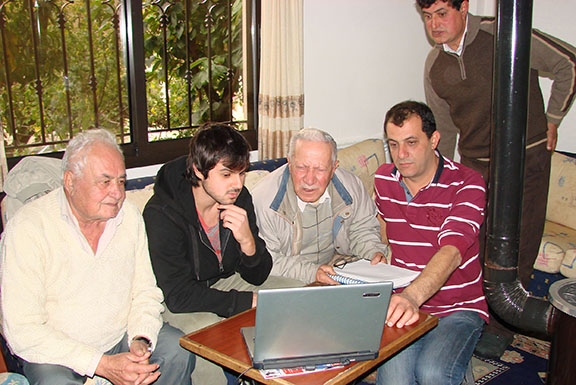 The family checking out pictures on my laptop from last years visit. Elias, Joe, Tannous, Sammy and Michel.